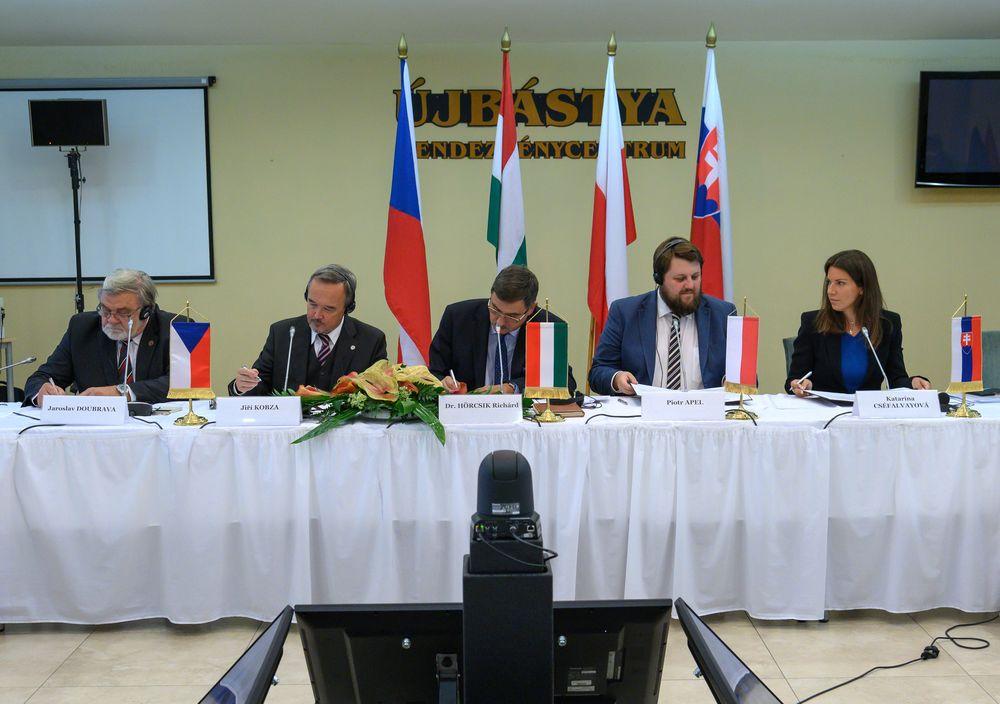 The three topics on the agenda of the meeting were: the post-2020 multiannual budget and strategic agenda of the European Union, regional and interregional infrastructure projects, and the potentials of cross-border tourism, with keynote presentations held by dr. Boglárka Ballester-Bólya, Deputy State Secretary for European Union Affairs at the Ministry of Justice, dr. László Mosóczi, State Secretary for Transportation of the Ministry of Innovation and Technology, and Hotel Manager Péter Bágyi, respectively.

In his opening remarks, dr. Richárd Hörcsik highlighted his expectations for a more balanced leadership from the new President of the European Commission, among others, with regard to national sovereignty and migration. Concerning the first item of the agenda, he recalled that the adoption of the multiannual budget starting in 2021 is a complex negotiation process in which the V4 and the “Friends of Cohesion” countries need to take joint and harmonized action in order to protect traditional policies. While underlying the significance of infrastructural projects for less developed regions, he praised the importance of developments and the planned progress in his constituency and the region, which help not only to extend connections but also to increase opportunities in tourism. He drew attention to the connecting role of tourism, e.g. the initiative to renew cooperation between seven historic mining towns.

With regard to the post-2020 multiannual budget, dr. Bernadett Szél emphasized that, based on the Strategic Agenda, more resources should be allocated to the achievement of climate goals. While urging the implementation of the Paris Agreement, she deemed the government’s 2030 energy goals as insufficient and the level of the V4 countries’ renewable ambitions as low. She agreed with the objections raised in connection with Mercosur during the discussions and argued for the protection of rainforests as well. While supporting the preservation of funds for traditional policies, she called for greater control over the use of EU funds and advocated for joining the European Public Prosecutor’s Office.

On the first topic, Katarína Cséfalvayová, Vice-Chair of the European Affairs Committee of the Slovak National Council, agreed on the need for V4 cooperation to protect the post-2020 budget, particularly in regard to the protection of the Common Agricultural Policy, at the same time, she would not object to new sources of revenue for the EU budget, and she showed openness towards additional contributions that might be necessary due to Brexit. Piotr Apel, Vice-Chair of the European Union Affairs Committee of the Polish Sejm, agreed on the importance of advocating traditional policies, especially with respect to the Common Agricultural Policy. He considers that the recent EU-Mercosur Trade Agreement is dangerous as it could possibly open the market to food not in compliance with EU standards, against which the V4 must take united action. Jiří Kobza, Vice-Chair of the Committee on European Affairs of the Czech Chamber of Deputies, also shared concerns about the Mercosur agreement. In his opinion, Member States’ contributions should not be increased for the post-2020 budget, and there is no need for new sources of EU revenue either, nonetheless, he considers it unacceptable that, while the rate of EU subsidies would decrease, the European Commission’s own budget would increase.

Concerning the second topic, Katarína Cséfalvayová stated that Slovakia also supports the development of the Trans-European Transport Network (TEN-T), however, instead of the East-West connections, more attention should be paid now to the North-South ones. She agreed on the importance of motorway developments and the need for a V4 high-speed railway and, regarding railways, she also considered the modernisation of freight transport and the reduction of environmental pollution as a priority. Jaroslav Doubrava, Member of the Committee on EU Affairs of the Czech Senate, agreed on the need to reduce road haulage and, in this context, he highlighted the potential of water and rail transport. Piotr Apel drew attention, regarding the North-South connections, to the Amber Rail Freight Corridor, which would run from the Polish-Belarusian border to the Port of Koper and the Hungarian-Serbian border. The Polish Head of Delegation then invited the partners to a forthcoming meeting of the Visegrad Four European Affairs Committees in spring 2020 in Poland.

At the end of the meeting, the participants unanimously adopted a closing declaration.