The Parliamentary Cooperation of the Visegrad Countries

Online meeting of the Speakers of the Parliaments of the Visegrad Group States, 21 April 2021

At the initiative of the Speakers of Parliament of Poland, which is currently holding the presidency of the Visegrád Group (V4), Speakers of the V4 Parliaments held an online meeting on 21 April 2021.

Online meeting of the Speakers of the Parliaments of the Visegrad Group States, 12. January 2021.

At the initiative of Tomasz Latos, the Chair of the Health Committee of the Polish Szejm, V4 parliamentary committees dealing with health-related issues held a video conference on 18 May 2021.

Videoconference of the V4 Parliamentary Committees on Agriculture and Rural Development on 14 May, 2021

A videoconference of the Committees on Agriculture and Rural Development of the Parliaments of the Visegrád Group was held on 14 May 2021 by the Polish Presidency of the Visegrád Cooperation in office from 1 July 2020 to 30 June 2021, by the invitation of Robert Telus, the Chair of the Committee on Agriculture and Rural Development of the Polish Sejm. At the virtual meeting, each parliamentary delegation was headed by the respective Committee Chair with the exception of the Czech Chamber of Deputies, represented by the Vice-Chair of its Committee.

Videoconference of the V4 Parliamentary Committees on Administration and Home Affairs on 13 May, 2021

At the initiative of Wiesław Szczepański, the Chair of the Committee on Administration and Home Affairs in the Polish Sejm, a videoconference was held for the Committees on Administration and Home Affairs of the Parliaments of Visegrád countries on 13 May 2021. There were two items on the meeting’s agenda: border security in relation to the expected increase in the number of refugees and terrorist threats in Central and Eastern Europe, with a focus on phenomena observed in Visegrád countries.

Conference of Presidents and Speakers of Parliaments of V4 Countries on the occasion of the 30th anniversary of the Velvet Revolution in Prague, 17-18 November 2019 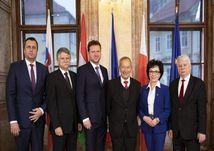 On 17-18 November 2019, under the Czech Presidency of the Visegrád Group, organised by the Senate of the Czech Republic, the Conference of Presidents and Speakers of Parliaments of V4 Countries was held in Prague on the occasion of the 30th anniversary of the Velvet Revolution.

Meeting of the Committees on Economic Affairs of the Parliaments of the Visegrad Countries, Prague, 3-4 February 2020 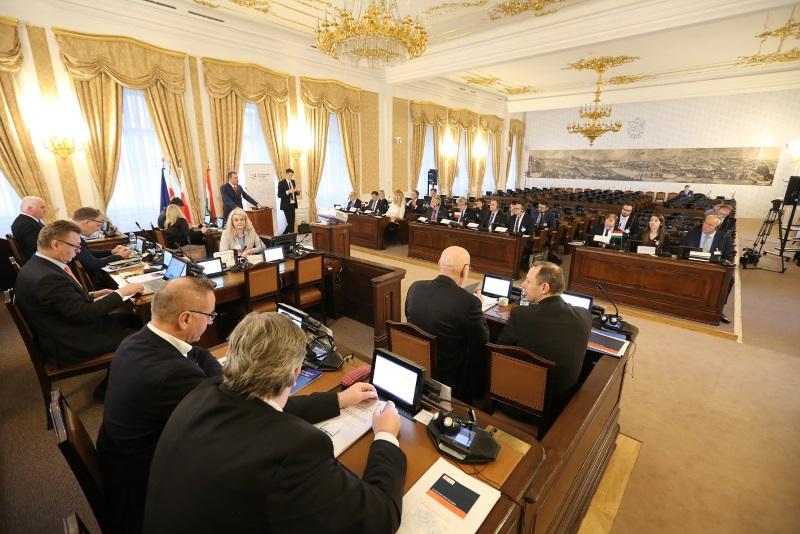 At the invitation of the Czech Chamber of Deputies, the Meeting of the Committees on Economic Affairs of the V4 parliaments was held in Prague on 3-4 February 2020. At the meeting the Hungarian National Assembly was represented by Jenő Manninger, Deputy Chair of the Committee on Economics and by Anita Potocskáné Kőrösi, member of the committee.

The Czech Chamber of Deputies, in cooperation with the Czech Senate, organised a joint committee meeting for the Defence Committees of the V4 parliaments on 7–8 January 2020. At the meeting the National Assembly was represented by Miklós Simon, Deputy Chair of the Committee on Defence and Law Enforcement. 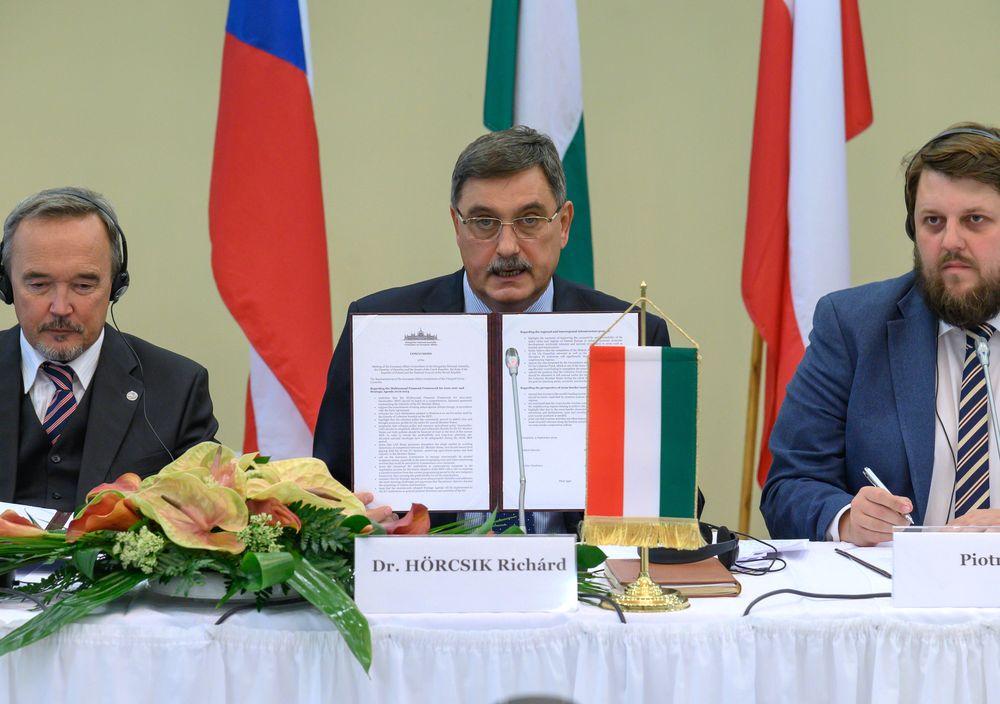 A meeting of the European Affairs Committees of the Parliaments of V4 countries took place in Košice on 24-26 April 2022, organised by the Slovak National Council. The event was hosted by Vladimira Marcinková, the Chair of the Slovak Committee and attended by representatives from the relevant committees of all V4 parliamentary chambers, except from the Polish Senate. The Hungarian National Assembly was represented by dr. Richárd Hörcsik, Chairman and Zoltán Tessely, Deputy Chairman of the Committee on European Affairs. Ivanna Klympush-Tsintsadze, Chairwoman of the European Integration Committee of the Parliament of Ukraine, also joined part of the event online, thanking all countries for the help they have provided to Ukraine so far and asking for further assistance to help them fight and survive

On 17 March 2022, the award ceremony of the competition titled ‘Hungary and the Central European Region in the European Union, the European Union in the World’ launched by the Speaker of the National Assembly, the Minister of Justice and the Head of the European Commission Representation in Hungary was held in the Parliament building.

V4+France Parliamentary Colloquium on the Future of Europe, Paris, 25 November 2021

In the context of the Hungarian V4 Presidency, on 25 November 2021, the Embassy of Hungary in Paris organised an inter-parliamentary colloquium on the future of Europe, with the participation of national Members of Parliament from the V4 countries and France. At this face-to-face event, the Hungarian Parliament was represented by dr. Hajnalka Juhász, member of the Committee on European Affairs, and dr. László Szakács, member of the Committee on Economics.

10th Meeting of Speakers of Parliaments of Southeast European Countries with the participation of the Speakers/Presidents of the V4 parliaments, 24 September 2021

Meeting of the European Affairs Committees of V4 countries, held in Prague, 5-7 September 2021

The Hungarian National Assembly adopted a political declaration „On the 30th anniversary of the establishment of the Visegrád Cooperation” on 15. February 2021.

The Hungarian National Assembly adopted a solemn political declaration „On the 30th anniversary of the establishment of the Visegrád Cooperation” on 15. February 2021. In the statement, the National Assembly expresses its appreciation and deep gratitude for the beginning of the co-operation on 15. February 1991 and for the fulfilment of European and Euro-Atlantic integration. It commends the role of the parliamentary dimension of cooperation and declares that it will continue its efforts aimed at integrating and developing the communities of the Visegrad countries. 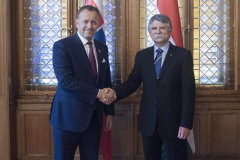 Upon his invitation Speaker of the National Assembly László Kövér received Boris Kollár, Speaker of the Slovak National Council on his official visit to Budapest on the 30th of June 2020 in the Parliament. 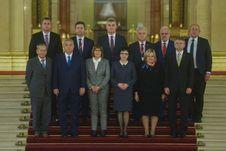 On 4 November 2019, the Conference of Parliamentary Speakers of Southeast European Countries was held in Budapest, organised by the Hungarian National Assembly, for the ninth time since the establishment of the event in 2004.

The rule of law issue must be separated from the topics of the post-2021 seven-year budget framework of the European Union (EU) and the recovery fund - emphasized the Speaker of the National Assembly László Kövér, after his meeting on 14 October 2020 with his Polish counterpart in Wrocław in the west of Poland.