null Informal Meeting of the Presidents and Speakers of V4 Parliaments, December 1st, 2017 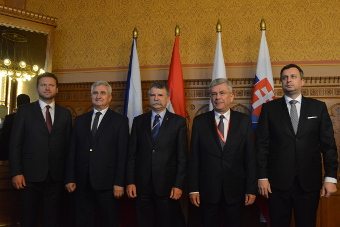 Budapest was the venue for the first Meeting of the Presidents and Speakers of V4 Parliaments during the Hungarian V4 Presidency. At the invitation of László Kövér, the Meeting was attended by Stanisław Karczewski, Marshal of the Polish Senate, Andrej Danko, Speaker of the Slovak National Council, Milan Štěch, President of the Czech Senate, and Radek Vondráček, Speaker of the newly formed Czech House of Representatives (Marek Kuchciński, Marshal of the Polish Sejm attended the gala dinner hosted in the Royal Palace of Gödöllő on the previous evening). As the Meeting began, László Kövér, Speaker of the Hungarian National Assembly welcomed his partners and thanked the participants for the successful joint implementation of the initiatives introduced by the Polish Presidency. He presented the goals and the programs planned for the Hungarian Presidency. At the Meeting, the Presidents and Speakers of Parliaments discussed potential ways to strengthen the representation of national parliaments in the EU’s institutional structure, and introduced ideas concerning possibilities for the enlargement of the European Union. László Kövér emphasized: the Hungarian Presidency wishes to continue the practice of regular consultations for Presidents and Speakers of Parliaments. The Formal Meeting of Presidents and Speakers will take place on 1st-2nd March 2018, and it is complemented by the meeting of the Committees on European Affairs (September 2017), the meeting of the Committees on Foreign Affairs, the meeting of the Committees on Social Welfare (December 2017), and the meeting of the Economic, Agricultural and Defence Committees (February 2018) of the different parliamentary chambers. In the framework for the cooperation of V4 Parliaments, the Hungarian National Assembly – beyond the meetings of committees – will also organise a working seminar and a conference in the first half of 2018, involving the representatives of academia and civil society. The agendas for the V4 Parliamentary Committee meetings will feature questions related to V4 cooperation and EU policy, while the working seminar and the conference are intended to discuss issues related to the European Union and the future of Europe. László Kövér proposed - as one of the topics for discussion at the working seminar and the conference - an exchange of ideas on the foundations for European values and consequently to adopt of a common stance against the persecutions of Christians. He pointed out: the Hungarian Presidency wishes to achieve that the V4 cooperation – as a brand – should appear in different policies in a positive way, putting forth constructive proposals. László Kövér also said that regular coordination among parliaments, the strengthening of their cooperation and a common stance adopted by the V4 on issues where the V4 position can be expressed internally within the EU and in the EU’s external relations as well are of fundamental importance. He highlighted that the changes having occurred across Europe in recent years necessitate the establishment of a V4 parliamentary rapid reaction group for the subsidiarity check of EU legislative proposals. The Speaker of the National Assembly asked his partners to support his proposal, who agreed to set up such a group at the level of the apparatus. The V4 Subsidiarity Group – with the appropriate political mandate and supervision – could play a decisive role in the development of the relations with EU institutions, especially in ensuring the flow of information. It could also play a role in following up on the activities of the task force established by President of the European Commission Jean-Claude Juncker on November 14th, dedicated to dealing with Subsidiarity, Proportionality and "Doing Less More Efficiently" method. With the rapid reaction group, the V4 could give impetus to the identification and launching of the - currently as yet unformalised - green card initiative, intended to strengthen the active role of national parliaments – the Hungarian Speaker emphasized. When discussing the possibilities for the enlargement of the EU, he pointed out: the facilitation and acceleration of the European and Euro-Atlantic integration process of the West Balkan region is a question of strategic and security-policy importance for the whole of the European Union. The V4 together - but also at the level of its member states - wishes to be an engine for enlargement – he added. Hungary encourages the establishment of a predictable schedule for the EU accession of Serbia and Montenegro, so that Macedonia and Albania could receive a date for the start of their accession talks already next year, and would also like to allow Bosnia-Hercegovina and Kosovo to see reachable goals in their integration process. He referred to the fact that Hungary has for long been a traditional and committed supporter of practical cooperation and cross-border infrastructural projects in the EU’s Eastern Partnership. Hungary agrees with the differentiated approach concerning Eastern Partnership policy and supports the approximation of countries able and willing to implement the reforms dictated by European integration. Referring to Ukraine’s new law on education, he, however, emphasized: the violation or any restriction of the acquired rights of minorities directly contradicts the requirements of „Europeanism”, thus Hungary – until the point when the restrictions introduced by the new law on education end – cannot support Ukraine’s political ambitions.
The Czech, Polish and Slovak Presidents and Speakers agreed with the proposals and points put forth by László Kövér and expressed their support for them.

Clikk to picture to visit Gallery. 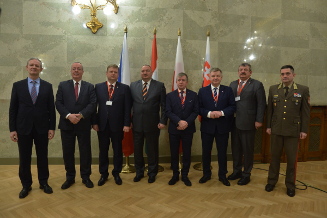 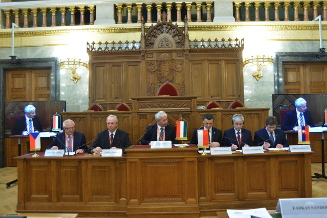 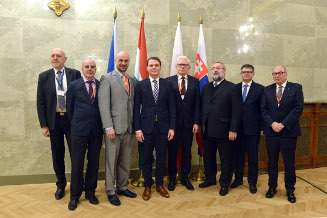 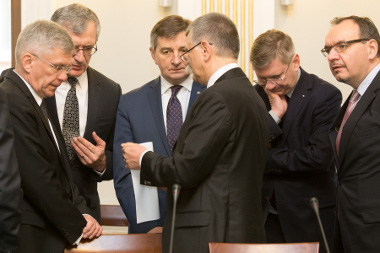 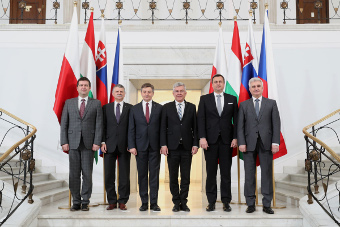 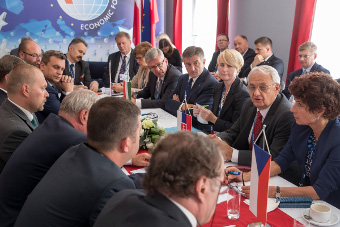 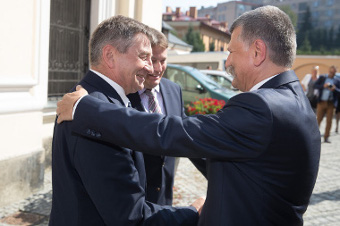