Official Visit to Hungary by Stanisław Karczewski, Marshal of the Senate of Poland 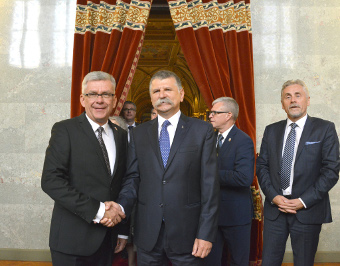 Stanislaw Karczewski, the Marshal of the Senate of Poland, led a delegation on an official visit to Budapest on 12-13 September 2016. During his visit, Marshal Karczewski held talks with Speaker of Parliament László Kövér and was received by Prime Minister Viktor Orbán and President of the Republic János Áder. He met members of the Hungarian-Polish Friendship Group and met separately with Zsolt Németh, Chair of the Foreign Affairs Committee, and Richárd Hörcsik, Chair of the European Affairs Committee.

In their meeting, László Kövér emphasised – in addition to the historic bonds dating back one thousand years – the importance of cooperation in the present and in the future. Stanislaw Karczewski spoke highly of the meeting in Krynica the previous week, calling the televised, public meeting there between Viktor Orbán and Kaczynski significant. He spoke with appreciation for the exemplary treatment Hungary’s leaders have demonstrated toward national minorities. Marshal Karczewski and the Hungarian Speaker of Parliament reviewed the joint proposal for the establishment of a V4 Parliamentary Assembly as well as the concerns the Czech Republic has voiced in the matter. In agreement, the Speaker and the Marshal emphasised the need to intensify cooperation between the two parliaments and to continue regular high-level dialogue between the two bodies. The Polish party proposed regular meetings, in addition to those bringing together parliamentary speakers, between governing-party deputy speakers and other parliamentary leaders.

In meetings in Budapest, Karczewski noted that, in addition to its efforts in the V4, Poland is open to cooperating with the countries of the Adriatic and the Black Sea. The Polish party affirmed their support for the Hungarian proposal to establish dialogue between committees dealing with Hungarians and Poles living beyond their countries’ borders.