Official Visit to Hungary by Milan Štěch, President of the Senate of the Parliament of the Czech Republic 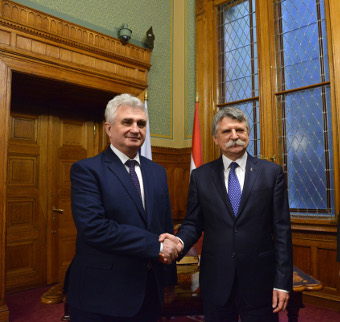 The visit of the President of the Senate of the Czech Republic included a meeting with Speaker of Parliament László Kövér and the Czech-Hungarian Friendship Group of the IPU (Inter-Parliamentary Union). President Štěch was received for a courtesy call by President of the Republic János Áder, and had meetings with Minister of Interior Sándor Pintér and Minister of Defence István Simicskó.

In their meeting, László Kövér and Milan Štěch agreed on emphasising the intensity of parliamentary relations, the harmony of positions observed in political meetings and the broadening of cooperation and economic relations between the two countries. They reviewed their positions concerning the most pressing matters on the agenda of the European Union, touching on, inter alia, efforts made to stem illegal migration, the future of the EU, the post-2020 multi-year budgetary framework, Brexit negotiations and matters related to the reinforcement of border protection. The two speakers agreed on the importance of representing V4 interests in a coordinated fashion at the EU level. They praised the effectiveness of V4 cooperation. The Czech President formulated criticism vis-à-vis certain southern states for their inadequate protection of the Schengen borders. Agreeing, the two speakers noted that the global migration crisis is the most serious challenge the EU is facing at the moment, and underscored the critical role and performance of Turkey in the matter.  Discussing further opportunities for bilateral and V4 cooperation, the two speakers highlighted the necessity for quicker and more effective coordination on EU matters. They agreed on the transfer of Hungarian experience in the field of electronic processes in public administration.

A Képgaléria megtekintéséhez kattintson a képre.