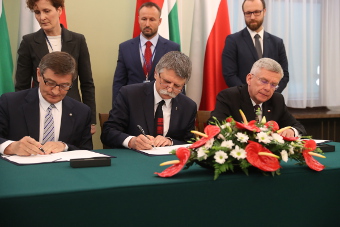 The Speaker of the National Assembly of Hungary paid an official visit to Warsaw on 18-19 April 2017 at the invitation of the Marshal of the Sejm of Poland.
In addition to the Speaker, the delegation consisted of Szilárd Németh, chair of the Hungarian-Polish Friendship Group of the IPU; Ádám Mirkóczi, vice chair of the Group; and Mrs. László Csúcs, spokesperson for the Polish nationality and a member of the Friendship Group.
During the visit, Speaker Kövér conducted a bilateral meeting with Marshal of the Sejm Marek Kuchciński and Marshal of the Senate Stanisław Karczewski, as well as with Prime Minister Beata Szydło. An official ceremony was held for the signing of an agreement on the strategic partnership between the Sejm and the Senate of the Republic of Poland and the Hungarian National Assembly.
László Kövér accepted the state decoration of the Order of Merit of the Republic of Poland, Commander’s Cross, bestowed upon him by President Andrzej Duda and presented by the Marshal of the Sejm. The Speaker laid a wreath at the tomb of the unknown soldier; delivered a lecture at the conference entitled “The Concept of the State According to the Teachings of Cardinal Ratzinger/Benedict XVI”; and spoke at the unveiling of the 1956 memorial in Warsaw.
During their meeting, the Speaker of Parliament and his Polish counterparts referred to the historical ties between Hungary and Poland dating back one thousand years, and noted the strategic importance both nations attach to fostering this relationship. They emphasised that the agreement signed in Warsaw provides an avenue for joint discussions of inter-parliamentary and Visegrád cooperation, as well as for the tasks and challenges the European Union is facing. They reviewed the content elements of the strategic cooperation and opportunities to advance it further. They examined the Polish proposal of expanding the agreement to the V4 countries, the countries of the Western Balkans and the Ukraine. They agreed to organise a meeting on the future of the European Union and its member states with the involvement of representatives of internationally-recognised organisations. Speaker Kövér and his counterparts discussed future cooperation and the specific form of joint events to be held during the Hungarian presidency. Among these, they highlighted the coronation celebration at the picture of the Virgin Mary to be held in late June at Saint Stephen’s Basilica in Budapest, as well as the commemorations organised for the 100th anniversary of the conclusion of World War I and the signing of the Treaties of Trianon and Versailles.

A képgaléria megtekintéséhez kattintson a képre.