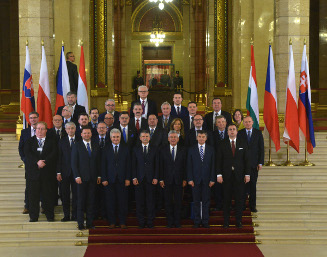 The official meeting of Speakers/Presidents of the Visegrád Group Parliaments took place on 2nd March 2018 in Budapest.  The meeting was attended upon the invitation of Kövér László, Speaker of the Hungarian National Assembly by Marek Kuchciński, Marshal of the Sejm and Stanisław Karczewski, Marshal of the Senate of the Republic of Poland, Milan Štěch, President of the Senate and Radek Vondráček, President of the Chamber of Deputies of the Parliament of the Czech Republic and by Andrej Danko, Speaker of the National Council of the Slovak Republic. The main topics of the meeting included topics such as the assessment of the V4 Hungarian presidency and the reinforcement of the Visegrád Group parliamentary cooperation. László Kövér, the Speaker of the Hungarian National Assembly explained that the official meeting of the Speakers was preceded by an informal meeting of the Speakers, a conference of experts and researchers, as well as the meetings of several standing committees, such as the European affairs, foreign affairs, family affairs, economics, agriculture and defence committees, which all ended with the unanimous adoption of closing documents reflecting shared Visegrád interests. Speaking at the conference, László Kövér highlighted that the topics discussed at the committee meetings – such as the future of the European Union, the EU and the NATO integration of the Western Balkans, the amendment of the postings directive, the next multiannual financial framework, the issue of overcoming demographic challenges, the significance of family policy the reform of the common agricultural policy, the elimination of double standards in food quality, the management of migration related issues and the opportunities for defence cooperation – not only represented joint interests and values of the V4 countries, but were issues of prominent importance for the future and the reinforcement of the entire European continent. The Hungarian Speaker informed his partners that the cooperation between the Visegrád country parliaments has never been as intensive as it was during the period of the Hungarian presidency. He emphasized: the V4 parliamentary meetings and the conclusions adopted there have further cemented the parliamentary relations between the Visegrád countries. He also emphasized the significance of the V4 joint action in defence of European values. Among these he highlighted the enforcement of the subsidiarity principle, as well as the protection of the achievements of European integration such as cohesion policy, the single market built on the four freedoms, the common agricultural policy as well as the common foreign and security policy. He considered it important that Visegrád country parliaments are participating for the first time in an EU twinning program aimed at the integration support for the Moldovan parliament. László Kövér pointed out that a more intensive application of the yellow card procedure, as well as the use of the red card for plans encroaching on their interests should be the tools to strengthen the role of national parliaments in EU legislative processes.
This was the first time that a joint conference of V4 Speakers/Presidents and the Parliamentary Committees participating in the parliamentary programs of the Presidency was organized on the side line of the official meeting of the Speakers. Speaking at the conference, Péter Szijjártó, the Minister of Foreign Affairs and Trade emphasized that the Visegrád cooperation is the closest and most efficient form of cooperation in the European Union. The V4 has become a renowned brand, which captures the attention of the entire European political elite as well as the media. Its voice is heard, and its economic potential makes it a significant actor in shaping European processes. He also spoke about the palpable enlargement fatigue in the EU and in this respect about the necessity integrating the Western Balkans region. He considered energy security to be the most important issue for the near future. He highlighted the role of the V4 countries in representing the Christian traditions and identity of our countries, while he also specially emphasized the importance of a single voice of national parliaments on issues of substance in European life.
After the committee representatives – Richárd Hörcsik, Zsolt Németh, Gabriella Selmeczi, Erik Bánki, Szilárd Németh chairpersons and László L. Simon the deputy chairman of his committee – briefly outlined the results of their committee meetings, the participating Czech and Polish representatives were also given the floor. After this, the Speakers/Presidents signed a Joint Statement in the presence of the press in which they emphasized the right of the Visegrád countries and national parliaments to contribute constructively to the debate on the future of Europe. They agreed that the Visegrád countries are interested in shaping an efficient and more citizen friendly European Union built on a community of strong and successful states. They pointed out that problems stemming from outside of the European Union, such as migration and the refugee crisis, need to be managed in their places of origin. László Kövér informed his partners that he will – in his capacity as the Chairman of the V4 Hungarian Presidency parliamentary cooperation – send the joint statement to the Speakers of national parliaments of the European Union and the leaders of the European Union institutions.
The joint conference of V4 Speakers/Presidents and the standing committees participating in the parliamentary programs on 2nd March 2018 concluded the series of official events organized under the auspices of the parliamentary dimension of the Visegrád Group Hungarian presidency. The V4 presidency will be handed over to the National Council of the Slovak Republic at an informal meeting of Speakers to be organized in June.