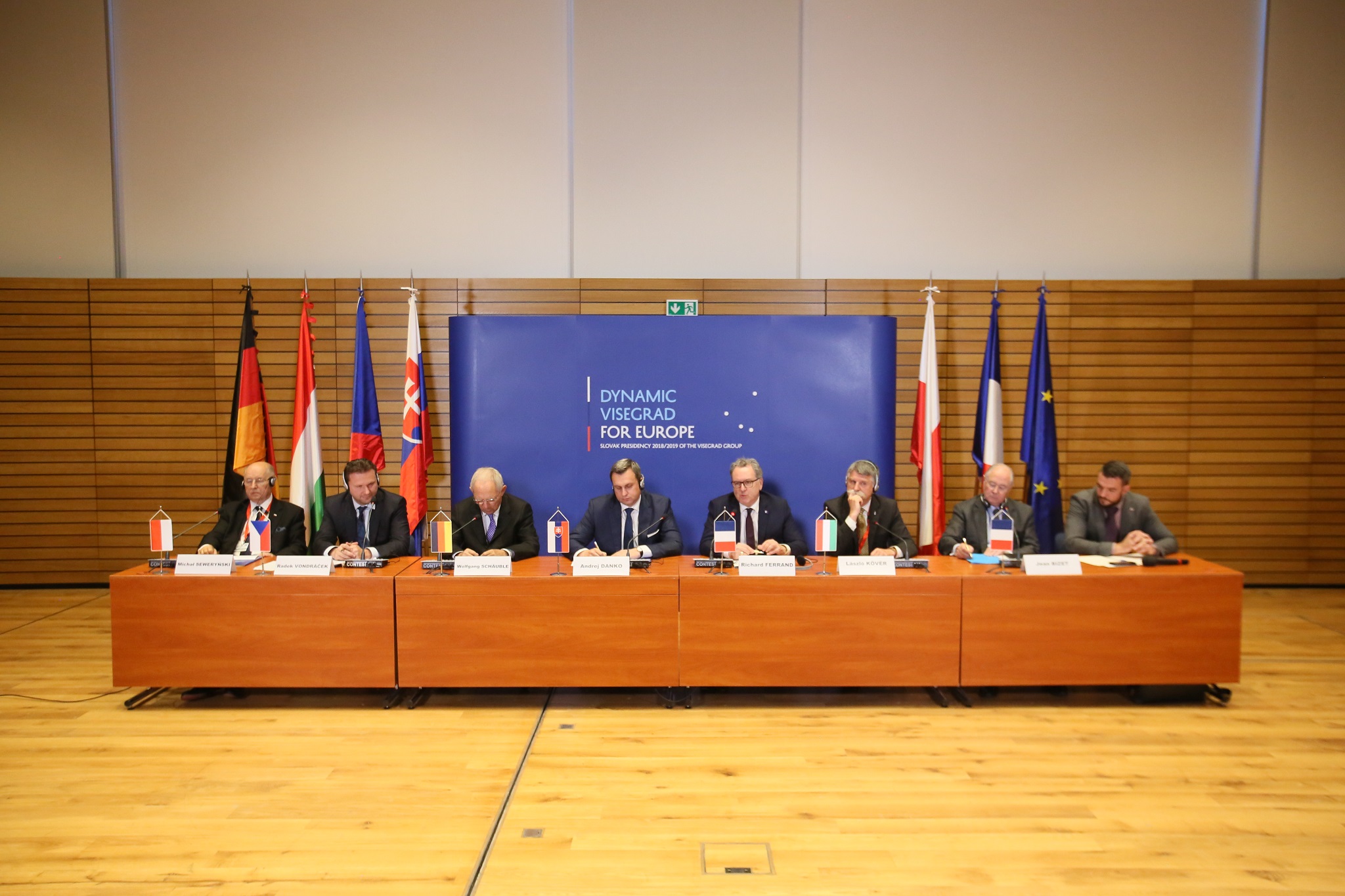 Informal meeting of the Speakers of the Parliaments of the Visegrád countries in Bratislava, on 15 November 2018

The National Council of Slovakia, which country holds the one-year presidency of the Visegrád countries, hosted the informal meeting of the Speakers of the Visegrád Group (V4) Parliaments in Bratislava on 15 November 2018, to which the Speakers of the French and the German Parliaments were also invited. During the Slovak Presidency, this was the second high-level meeting after the meeting held on 12 and 13 October in Košice within the framework of parliamentary cooperation.
The main issues addressed at the meeting held in V4+ settings included the future of the EU (values, institutions, policies) as well as the 2019 elections to the European Parliament. Besides Andrej Danko, Speaker of the Slovak Parliament, the meeting was attended by Radek Vondráček, President of the Czech Chamber of Deputies, Marek Kuchciński, Marshal of the Polish Sejm, as well as Michał Seweryński, Deputy Marshal of the Polish Senate (the Czech Senate did not attend the meeting because of the election of the new Presidium of the Senate). Besides the V4 countries, Wolfgang Schäuble, President of the German Bundestag, Richard Ferrand, Speaker of the French National Assembly, as well as Jean Bizet, Chairman of the Committee for European Affairs of the French Senate and Robert Del Picchia, Chairman of the Committee for Foreign Affairs of the French Senate were present.

The Hungarian National Assembly was represented by its Speaker, László Kövér. In his two speeches delivered at the event, the Speaker of the Hungarian National Assembly emphasised, among others, that “regarding the values attached to integration, demography, identity and governance raise the basic questions, and mutual acceptance or rejection of the answers to those questions may determine whether the EU will follow the path of integration or the path of disintegration in the future”. He added that this was the real challenge of the next EP elections and this was the reason why the elections could have a significant effect on the future of the Union, and that the voting in spring could be the first occasion for voters to weigh the European vision of the Member States’ governments.

At the press conference that followed the event, the Speakers of the Parliaments of the Visegrád countries summarised what had been said and formulated priority messages. At the press conference that followed the discussion, László Kövér said in his assessment that the atmosphere of the meeting was more sincere than that of any other similar forum before, but there were issues on which opinions of the V4 countries and their Western European guests were still divergent. Migration is one such issue, as is the perception about the role of the European institutions, the European Parliament and the European Commission after next year’s EP elections. Wolfgang Schäuble emphasised in front of the press that “Apart from respecting each opinion, we need to look for the solutions for certain global issues together.” Richard Ferrand, Speaker of the French National Assembly, pointed out that Europe is not a problem, but a solution, and there is a need for a dialogue based on respect in disputes. The same was urged by Radek Vondráček, President of the Czech Chamber of Deputies, according to whom unification is not what the EU needs, but there is a need for a Europe that is based on the mutual respect of differences. According to Michal Seweryński, Deputy Marshal of the Polish Senate, it is primarily the reinforcement of democracy that can contribute the most to resolving the problems within the EU, and one way to do so is to extend the role of national parliaments vis-à-vis the European Parliament.