null Videoconference of the European Affairs Committees of the V4 Parliaments, 24 November 2020 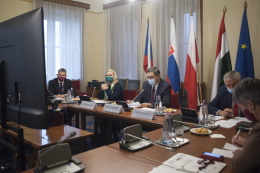 The European Affairs Committees of the V4 Parliaments met for the first time via videoconference on the initiative of Stanisław Tyszka, Chairman of the Polish Sejm EU Committee. The Committee on European Affairs of the Hungarian National Assembly was represented by committee chair dr. Richárd Hörcsik, deputy-chair Zoltán Balczó and member of the committee Hajnalka Juhász. Delegations participating at the event on behalf of Poland (Bogdan Klich for the Senate, beside the host party) and the Czech Republic (Ondřej Benešik from the Chamber of Deputies and Mikuláš Bek, for the Senate) were led by committee chairs while the delegation on behalf of the National Council of the Slovak Republic was headed by a deputy chair of the committee (Zita Pleštinska)
There were three topics on the agenda of the meeting: the European Green Deal, the Pact on Asylum and Migration, and an informal discussion on current EU issues under “any other business”.
Speaking about the goals of the European Green Agreement in his contribution, dr. Richárd Hörcsik assured the participants about his agreement, but also drew their attention to the importance of fair burden sharing. Zoltán Balczó pointed out that as a member of the relevant committee of the European Parliament he had previously dealt with environmental issues, and drew attention to the fact that one could not regard nuclear energy as green energy, if one considered its entire life cycle. Hajnalka Juhász described in detail the main provisions of the Climate Protection Act adopted by the National Assembly, and also pointed out the threat posed by so-called carbon leakage.
With respect to the migration crisis that began in 2015, dr. Richárd Hörcsik referred back to the fact that the V4 parliaments had jointly opposed the mandatory relocation mechanism related to the amendment of the Dublin Regulation and initiated a yellow card procedure. He considered the mandatory solidarity mechanism to be the most worrisome element of the Pact on Asylum and Migration and stopping illegal migration to be its most important goal. In his contribution, Zoltán Balczó referred to the European Council Conclusions of 28 June 2018 (point 6), which articulated out the voluntary nature of resettlement and relocation.
Under “any other business” of the agenda, participants reviewed issues related to the EU's multi-annual budget and the rule of law mechanism. Dr. Richárd Hörcsik emphasized that he thought it was unacceptable that the German EU Presidency and the European Parliament had reinterpreted the July 2020 European Council agreement, which was also welcomed by Hungary, and that he regretted the lack of a definition of the rule of law at EU level. However, Zoltán Balczó considered the conclusions of the European Council of July 2020 to give room to combine the protection of the EU's financial interests with the respect for the rule of law.
The next meeting of the European Affairs Committees of the V4 Parliaments will be hosted by the Czech Chamber of Deputies in the spring of 2021. Stanisław Tyszka suggested a discussion on national recovery plans as a possible topic for the next V4 meeting.