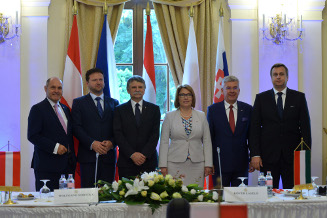 The Meeting began as László Kövér – assessing the more significant results of the parliamentary cooperation of the Hungarian Presidency of the Visegrad Group – emphasized that the Hungarian Presidency successfully identified areas where the Visegrad countries can act together and where their positions are identical concerning their EU membership and Central European identity. These areas are reflected both in the conclusions adopted by the V4 parliamentary committees by consensus and by the Joint Declaration of the Presidents and Speakers of Parliaments adopted in March. The Speaker of the Hungarian National Assembly underlined that – from the perspective of the V4 countries’ parliamentary cooperation – relations have never been as visible and as intensive as in the past period. The visibility of the parliamentary cooperation of V4 countries was advanced by forwarding the declarations adopted by consensus to the EU's national parliaments and the EU institutions, and also by the launching of a V4 website - in Hungarian and in English - under the auspices of the Hungarian National Assembly. The conferences of experts, the higher level of cooperation among the parliamentary libraries, the series of cultural and musical programmes on Kossuth Square and the publication assessing the results of the work of V4 parliaments and featuring analyses on the future of the European Union all contributed to a heightened visibility.

In his introductory remarks to the first topic, László Kövér concluded that the best interest of the V4 countries is a strong, secure and competitive EU, and that they envisage the new multi-annual financial framework as reflecting these principles. As regards competitiveness, the V4 countries welcome the increase in funds to be dedicated to innovation, research and development and digitalisation, but do not accept that the new areas should be funded at the expense of traditional policies (Common Agricultural Policy, Cohesion Policy). The Speaker of the Hungarian National Assembly pointed out that the proposal of the European Commission fails to reflect common priorities, does not ensure the same support to traditional policies as before, and the Visegrad countries and Baltic states would be most punished among Member States as the proposal reflects an overall more than 20% reduction in the funding they would receive under the Cohesion Policy. The Speaker of the Hungarian National Assembly underlined that the next multi-annual financial framework and the political will it reflects must both rest on mutual respect, and that the establishment of a mechanism making EU funding an instrument of exercising political pressure cannot be supported. Austria – holding the forthcoming EU Presidency - will play a fundamental role in determining the outcome of the negotiations on the EU’s financial framework mechanism. The V4 countries count on the partnership of Austria’s EU Presidency in making sure that on all issues of political sensitivity, Austria will take the position of the V4 countries into consideration as well.
Concerning the issue of migration, the Speaker of the Hungarian National Assembly emphasized in his introductory remarks that the focus must remain on halting the migration wave arriving from outside the European Union and on terminating the reasons that cause it. He also pointed out that an effective handling of migration requires that focus is put on areas where the member States agree, and that any continued effort to impose rules like mandatory relocation or the facilitation of legal migration routes would only contribute to the deepening of their division. „However, we do not only have to maintain the protection of the EU’s external borders, but must also strengthen it” –the Speaker of the Hungarian National Assembly accentuated.
Following the debate on the two topics on the meeting’s agenda, Andrej Danko presented the priorities and events of the parliamentary cooperation of the Slovak Presidency of the Visegrad Group in the period between July 2018 and June 2019. During its V4 Presidency, Slovakia will focus on internal dynamism, competitiveness, security and the strengthening of the Visegrad Region, which is an organic part of the EU. The Meeting was concluded by the Speaker of the Austrian National Council Wolfgang Sobotka presenting the priorities and planned programmes of parliamentary cooperation under the Austrian Presidency of the Council of the European Union to the participants.

Following the Informal Meeting of Presidents and Speakers of Parliaments, the parliamentary football teams of the V4 countries participated in a tournament in the football pitch of the Balatonfüred Football Club. The tournament ended with the victory of the Hungarian team.