Handover of the rotating presidency of the Visegrád Group in Cracow on June 29, 2017 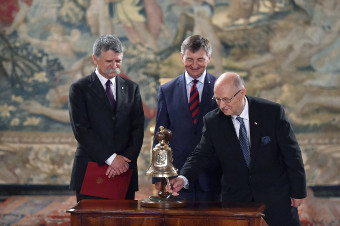 The ceremony for the handover of the rotating presidency of the Visegrád Group was held in the Senators’ Chamber of the Castle of Cracow, i.e. the Wawel. Marek Kuchciński, the President of the Polish Sejm - when assessing the parliamentary cooperation during the Polish presidency - mentioned the interparliamentary summits held in the V4 as well as in broader formats, the Visegrád news portal accessible on the website of the Polish Parliament and the strategic cooperation agreement signed by the Hungarian and Polish legislatures in April 2017. László Kövér, the Speaker of the Hungarian National Assembly, expressed his appreciations for the successful implementation of the Programme of the Polish Presidency also focusing on interparliamentary cooperation, and emphasized that the Presidency set as one of its goals the effective advocacy of the interests of the Group. He highlighted, among other things, that in addition to cooperation in political and policy matters, the Hungarian Presidency will strive to raise increased awareness of the Visegrád Cooperation –achieving recognition and genuine brand status over the past 26 years – in but also beyond the region. The Hungarian Presidency wishes to convey strong messages concerning the fact that the Visegrád Group contributes to the stability and growth of Europe, and wishes to take an active part as a constructive partner in the most important European debates. The same complex goal is also reflected in the presidency’s motto: „V4 connects”, in the political, economic, infrastructural and societal sense of the word as well. The Parliamentary dimension of the Hungarian V4 Presidency – building on the achievements of the Polish Presidency -  wishes to continue the practice of regular consultations among the Presidents and Speakers of V4 parliaments, while also adding regular consultations among V4 parliamentary committees for foreign affairs, defence, the economy, agriculture and European Union affairs.