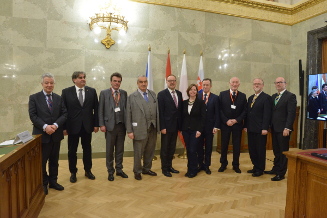 The Parliament served as the venue for the meeting of the Foreign Affairs Committees on 13-14 December 2017 held under the auspices of the Hungarian V4 Presidency’s parliamentary dimension Zsolt Németh, Chair of the Foreign Affairs Committee of the Hungarian National Assembly hosted his partners, Karel Schwarzenberg from the Czech Republic, Ryszard Majer from Poland, František Šebej from Slovakia and their delegations. The position of the Hungarian government was presented at the meeting by Deputy Minister of Foreign Affairs and Trade Levente Magyar and Political Director Levente Benkő.
There were two topics on the agenda of the meeting: chairpersons of the Foreign Affairs Committees of the Western Balkan countries were also invited to attend the panel discussion titled “The Stability of the Western Balkan – the Perspective of the European Integration”. The topic of the second panel discussion was “The Future of the Common Foreign and Security Policy”. In his introductory remarks Zsolt Németh stipulated that the cooperation between the Visegrad countries is the most successful one within the European Union. Enlargement policy has become one of the success areas of the EU, thanks to the recognition that integration of the Western Balkans is not only an economic but also an important security policy interest for both the accession countries and Europe as a whole, but especially for Central Europe. He added that Hungary is a dedicated supporter of EU enlargement and the reunification of Europe, because the Visegrad countries also owe it to this aspiration that they were able to join the EU and NATO. He welcomed the European Commission's announcement in September that EU accession could come within reach for frontrunners Montenegro and Serbia, but to achieve this, candidate countries must fully comply with all criteria. However, EU Member States - not only those in Central Europe, but also in Western Europe - should unite in their support of enlargement. He recalled that Jean-Claude Juncker, President of the European Commission, set 2025 as the date for the EU accession of the first Western Balkan countries and expressed his hope that as many countries as possible can meet the conditions until then. He also expressed his hope that the Heads of State and Government will strengthen and make the accession perspective more credible at the European Council meeting in May 2018, which is set to discuss the Western Balkans. Maciej Popowski, Deputy Director-General for Neighbourhood and Enlargement Negotiations of the European Commission said: the EU is committed to the integration of the Western Balkans but the enlargement process can only be successful if it is not only supported by the community of the Member States but also by the population. He expressed that the Western Balkan countries have come a long way since the wars of the nineties: it is up to them when accession becomes a reality. He stressed that the Union does not offer any compromise, each candidate has to fulfil all the conditions.
With respect to the EU Common Foreign and Security Policy, Zsolt Németh underlined: Hungary supports the EU's united and decisive foreign policy stance and agrees with the work aimed at strengthening EU defence capabilities. One of the key areas of operation of the Common Security and Defence Policy could be the enhanced protection of external borders. He added that attention should be paid to the countries of the Western Balkans and the Eastern Partnership, and the objectives of the Common Foreign and Security Policy should be pursued in coordination with NATO. The Chairman of the Foreign Affairs Committee of the Hungarian National Assembly addressed the regular meetings of the Chairs of the Foreign Affairs Committees and informed the participants that four other Committees - Social welfare, Agriculture, Economics and the Defence – will also be meeting during the Hungarian Presidency. He emphasized that the committee delegations attending the parliamentary meetings ofof the Hungarian Presidency and the Speakers are scheduled to hold a joint session in the Parliament in March next year.
The Chairs of the Foreign Affairs Committees of the V4 Parliaments held a joint press conference as the closing event of their two-day meeting. They called their meeting very successful, which is reflected in the jointly developed closing document, in which they agreed on the importance of the Western Balkans enlargement and the Common Foreign and Security Policy, shared interests related to security policy and the future of the EU and voiced their hope that, at the end of this difficult process, the Western Balkan countries will successfully complete their integration. The committee chairs also agreed that it is the shared interest of the V4 countries to help the Western Balkans region to move closer to the EU, while expecting each candidate country to do their utmost to comply with accession criteria.