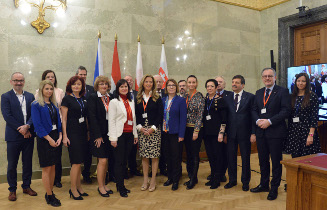 The representatives of the Visegrad Countries Parliamentary Committees responsible for family policy issues met in Budapest on December 20-21, 2017. Gabriella Selmeczi, the Chair of the Social Welfare Committee of the Hungarian National Assembly was joined in the meeting by the Chairs of the Family Policy Committees of the Senate of the Parliament of the Czech Republic Alena Sromová, of the Chamber of Deputies of the Czech Republic Radka Maxová, of the Sejm of the Republic of Poland Beata Mazurek, of the Senate of the Republic of Poland Ryszard Majer,   and of the Slovak National Council Alena Basistová. The following two topics figured on the agenda of the meeting: the demographic situation in the V4 countries and the proposal of the European Commission for regulation on the coordination of social security systems.
The position of the Hungarian government was presented by Attila Beneda, Deputy Secretary of State for Family and Demographic Policy of the Ministry of Human Capacities and Deputy Head of Department Réka Kovács.
Hungary believes in strengthening the role of the families, and not in organising and supporting migration – said Gabriella Selmeczi, and emphasized that family policy does not equal social policy. The goal is to allow every family to have the children they desire and plan to have, and that this goal can only be achieved if new measures supporting families and young people are adopted. She announced that the Hungarian government designated 2018 to be the Year of the Families, thus more measures supporting childbearing are to be expected next year. She emphasized the importance of reducing the costs of living, so that the birth of children should not mean the acceptance of poverty, and also underlined the need for the raising of children to be more appreciated in the public mind.
The participants of the meeting agreed that each of the four countries show the signs of an aging society, and that every Member State must find a solution to the demographic crisis and the population decline that can be observed across Europe. It is also necessary to strengthen the EU’s family policy. Gabriella Selmeczi added: Hungary believes that demographic challenges cannot be managed by facilitating migration, but by an appropriate family policy, by strengthening families and by encouraging childbearing. The representatives of the V4 family policy committees attending the meeting reviewed the answers given by the individual Member States to the alarming demographic situation. They also agreed that the family is based on the relationship between a woman and a man and rejected the concept that ignores the gender-based approach. The Hungarian chair hosting the meeting underlined: V4 countries should speak out together at each and every forum against the amendment of the regulation on the coordination of social security allowing the indexation of family benefits. This would be an unjustifiable solution rejecting the principles of European law. She added: in the context of the cross-border protection of families, V4 countries must also participate in the legislative process in an efficient manner.
At the end of the meeting the MPs of the four countries signed a joint document and expressed their pleasure over the joint attention they are dedicating to the all-encompassing demographic crisis. They resolved to promote a forward-looking Member State cooperation in the field of family policy.  At the press conference concluding the meeting Gabriella Selmeczi announced that the joint document would be forwarded to the European Parliament and to every EU national parliament.